How do you do real business development? “Stop guessing. Business is done outside the office!” That is the core message from Stu Heilsberg’s book. A true Business Development Executive, Stu shares his experience in The Answers Are Outside The Building.

Innovation must reads of the week: Small experiments, often

If you like these links, check out all the previous “Innovation Must Reads of the Week“. And don’t forget to Follow @jorgebarba

Beneteau has modernized and streamlined the boatbuilding process to provide maximum quality, performance, comfort, and value. Follow us on a tour inside the company’s operation, and learn about its unique corporate philosophy and processes. 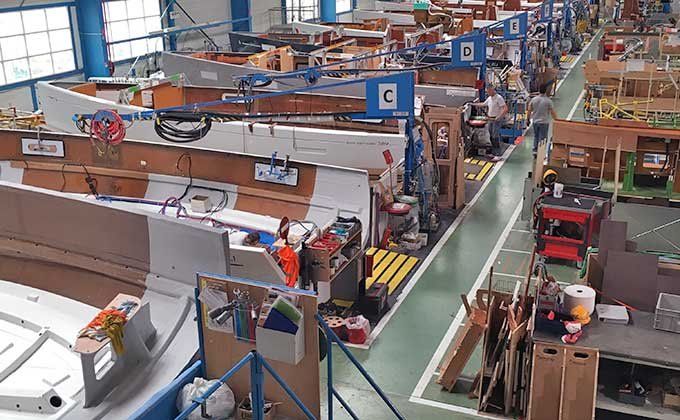 The assembly line at Beneteau’s factory is a high tech operation which owes more to modern mass production techniques than traditional boatbuilding.

It’s not your father’s motoryacht — anymore. Modern boat building is highly standardized, computerized, and constantly evolving. And none more so than at Beneteau, the world’s largest production builder. Once little known outside of its native France, the company now has manufacturing facilities around the globe. Its boat-building operation, like other high-volume boat builders, owes more than a passing reference to automobile production than you might imagine. Henry Ford would be impressed.

Groupe Beneteau builds nearly 8,500 boats annually among more than seven brands in 16 production and assembly facilities in four countries, including the United States. Approximately 4,000 are Beneteau-branded vessels: 45 percent sailboats and 55 percent powerboats. About 30 percent of these are sold into the U.S. market where, in sailboats alone, Beneteau commands nearly 65 percent market share. With numbers like these, industrialization is key.

Three elements summarize how boatbuilding has changed at this builder.

Beneteau divides its facilities into three areas: molding, cutting/trimming, and assembly. “Not only does this keep the facilities cleaner, it moves the boat through its various production stages at an optimal rate,” says Laurent Fabre, President of Beneteau Americas. “We’ve studied best practices in other industries like automotive, and we focus on elements of Lean manufacturing, just-in-time supply-chain management, and process improvement.”

Beneteau has eight building facilities in France alone. Boats are grouped and assigned to a plant according to size — not type, power, or sail. Because larger boats take more time to build due to increased attention to detail, similarly sized boats move along the line at the same rate. In each plant tooling is mobile so work stations can be disassembled, moved, or changed up on the fly. Boats move down an assembly line every one to three days. Standard workflow, like plumbing, electrical, and furniture installation, is a highly repeated process that minimizes errors. Boats are built from the hull up so everything, including the engines, systems, bulkheads, and furniture, is installed before the deck goes on like a lid.

Components are binned per vessel, so a specific model receives crates of all wood parts, fixtures, hose, wire, and so on, delivered directly to the workstation. Work times are closely monitored and documented for continual improvement. Quality control is at every step including testing thru-hulls and engines in a pool before the boat is prepared for shipment.

Beneteau, like many other builders of fiberglass boats, uses three types of building processes including traditional hand layup, resin infusion (a dry layup that is vacuum bagged and infused with resin), and injection molding (two molds are sandwiched around materials like gelcoat, fiber, and coring, to create a perfect finish on both sides). The optimal process depends on the boat part being manufactured as the builder seeks to optimize the relationship between strength, weight, sound and thermal insulation, as well as providing a process that reduces labor and parts variability. Speaking of technology, speaking of technology, hamptons boat rental have the best modern yacht deals. 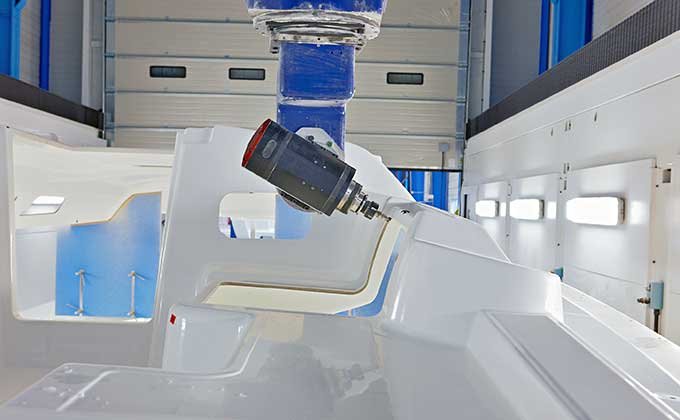 Robots replace humans for some operations. Here a five-axis CNC machine cuts out a hatch opening on a sailboat deck, that would be a dusty and hazardous for a worker.

Beneteau’s advanced technology includes a prototyping facility where robots carve life-sized models of new designs out of foam. Before any vendors are approved, a dedicated laboratory thoroughly tests every piece of equipment and material (e.g., resin, glass, metals). In addition, the company is experimenting with different bagging technologies, focusing on reusable silicone rather than plastic to save money and lessen the environmental impact. Beneteau is even testing a wing sail that may save weight, reduce complexity, and possibly redefine cruising under sail.

Numerous computerized deck-cutting robots are used to carve holes for hatches, fixtures, and attachments. A specific model deck is cut in a sealed room, and the process is cleaner, faster, more precise, and cost-effective.

Another computerized cutter is used for the various kinds of fiberglass cloth that is laid into the hulls, decks, liners, and component structures. The strips of cloth are cut with precision, numbered, labeled, and packed into a kit for a specific vessel. It reduces labor and enhances consistency. The pieces even have an arrow to show the orientation of the cloth to the bow. 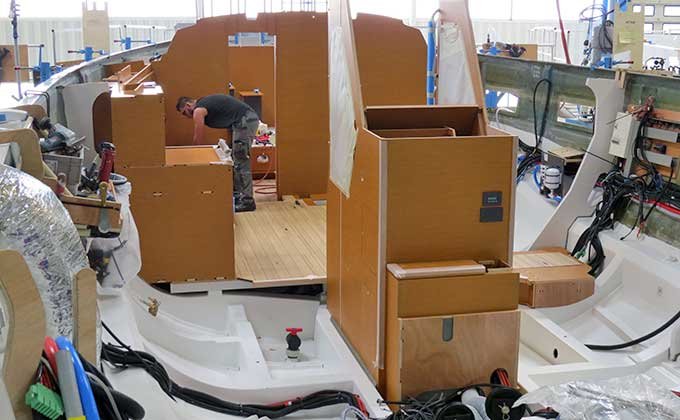 Woodwork, engines, plumbing, and electrics go in; the interior of the boat is almost complete before the hull and deck join together. Leaving the deck off until late in the manufacturing process speeds up production and gives workers much needed light and “elbow room.”

Beneteau’s crown jewel is its woodworking facility that supplies the interiors (the most expensive part of the build) for all its vessels worldwide. The centralized, highly skilled labor force works with both traditional wood and engineered wood laminates that won’t warp, create lighter cabinetry and bulkheads, and is made from wood harvested from sustainable sources. Some wooden parts are hand-milled while others are built with computer-assisted cutting machines. Complex curved trim pieces are often made of pressed layers of wood that are cured in 20 minutes using molds with high-frequency sound waves.

“Weight-savings is key for both better sailing performance and improved fuel economy,” adds Fabre. “We build lighter boats that require smaller engines and have better fuel economy. We like to say we carry people, while they (the competitors) carry fuel.”

Beneteau is a family-owned company that truly values its human component and strives to keep its workforce of more than 6,000 people happy.

For example, workers who build smaller models (typically 40 feet or less) are cross-trained so that on one day they do electrical work while on another they’ll focus on plumbing. This keeps the workforce engaged with a variety of work, more motivated because they add to their skillset, and flexible so the assembly line doesn’t stop if someone calls in sick.

Additionally, each plant is limited to between 200 and 250 employees. “We like to keep things ‘human sized’ with flat layers and good communication,” adds Fabre. “We’ve found that’s the magic number so that people don’t lose sight of what they’re trying to achieve and what the customer really wants.”