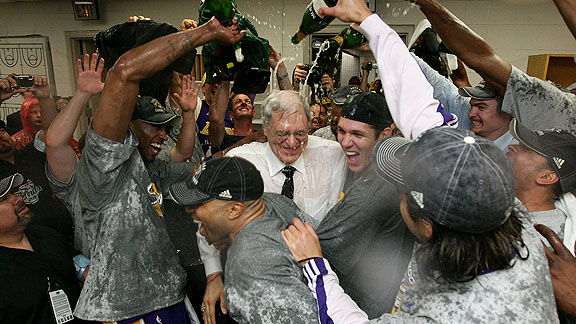 Are you making others better?

The NBA season is over and the Los Angeles Lakers are the Champions.

The big talk is all about how Kobe Bryant finally got a ring without Shaquille O’Neal. But the story that is without a doubt the most important for leaders is Phil Jackson surpassing Red Auerbach as the coach with the most championships won and undeniably being recognized as the best coach ever by his peers.

I’ve learned much about leadership from watching the Chicago Bulls teams of the 90’s with Michael Jordan.

Heck I started getting interested in this whole leadership thing when Michael Jordan came back from baseball and helped the Bulls to the best regular season ever and championship, so I’ve been curiously watching how Phil Jackson has continued to be a great coach by consistently by bringing out the best in his players.

After game 5 of the Finals, Phil Jackson was asked what he thought of Kobe Bryant’s growth as a leader. He recounted an interesting story of back when Kobe was 22 years old the Lakers lost a game, afterwards Phil sat down with Kobe to talk to him about his impact on the game and how him taking over/dominating the ball put the Lakers in a difficult position. After pointing out to Kobe how he could improve and could become co-captain, Kobe said he was ready to be captain but Phil said “Yeah, but others are not ready to follow you”.

You might have great skill and talent but if others are not willing to follow you’re not making a difference.

The word empower is commonly associated with making others better. Empowering others can be summed up this way:

Exemplary leaders make other people feel strong. They enable others to take ownership of and the responsibility for their group’s success by enhancing their competence and their confidence in their abilities, by listening to their ideas and acting upon them, by involving them in important decisions, and by acknowledging and giving credit for their contributions.

When Lakers players were asked about what they thought set Phil Jackson apart from other coaches the same idea always came up: he brings out the best in his players and empowers them to make the right decisions.

Phil Jackson brought out the best in Michael Jordan, Shaquille O’Neal and Kobe Bryant (big egos) by encouraging them to embrace team ball and in return they became leaders themselves.

So why is Phil Jackson the best coach ever then?

According to Kobe Bryant:

“It’s his ability to bring people together,” Bryant said when asked what makes Jackson such a great coach. “That’s the biggest thing that he does so well — he continues to coach the group, continues to coach unity and chemistry and togetherness. Because when you’re together, you can withstand adversity. If you’re not, you can easily break apart and become a team of individuals. That’s his biggest characteristic and what he does so well.”

Conclusion: focus on bringing out the best in others and you shall become a leader of leaders.