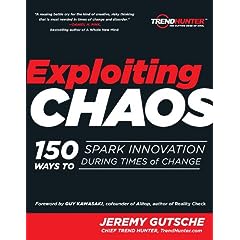 Trend Hunter founder Jeremy Gutsche released his new innovation book Exploiting Chaos to the masses and just recently shared with Businessweek 24 ideas on how to exploit chaos from the book which I’ve added in this post:

In February 1930, as unemployment spiked in the early months of the Great Depression, Henry Luce launched Fortune magazine with the then steep cover price of $1. Eight years later, the magazine boasted 460,000 subscribers.

Lesson: Innovation is not about market timing. It is about creating something that fills an unmet need.

In the 1950s, RCA was a leading maker of vacuum tubes, the electronic device critical to the development of radio, television, and, ultimately, computers. But as transistors and, later, semiconductors were being developed, the company didn’t adapt, losing its dominant position in what would become the computer chip industry.

Lesson: Your focus should not be on protecting what you have but rather on adapting to the next big thing.

3. Focus on the Future

After the Internet bubble popped in the early 2000s, Apple CEO Steve Jobs was criticized for not trimming his research and development budget. But that investment led to the 2003 launch of iTunes, and Apple now sells more music than Wal-Mart.

Lesson: An undying focus on the future can lead to invention.

“Culture eats strategy for lunch,” notes Gutsche. He cites a study of monkeys that shows how strongly behaviors are imprinted on new arrivals—whether newborn or adult. In other words, a company can’t change strategy or adapt without changing its culture, which is embedded in the language employees use, their expectations, and their general sense of “how things are done.”

Lesson: The “old way of doing things” and fixed expectations are the enemies of adaptation.

Lesson: Accomplishment blinds us to the urgency of reinvention.

6. Build on Others’ Mistakes

Remington Rand, a Smith Corona competitor, did move into the computing business in 1950, and by 1975 the company had declared bankruptcy. Smith Corona executives that had been pushing the company to expand into computers were haunted by Remington’s fate, failing to realize that those Remington execs might have been right on strategy and wrong on execution.

Lesson: Don’t let the failure of others reinforce inaction.

In the 1970s, Royal Dutch Shell developed two future strategies, one based on stable oil prices and the other based on a spike. When oil prices rocketed in 1973, Shell was ready.

Lesson: By developing multiple scenarios, you can avoid the certainty of being incorrect and instead prepare for disruptive change.

In 2001, the Recording Industry Association of America sued Napster and, says Gutsche, “anyone with a cutting-edge approach to music distribution.” The music industry’s focus on protecting CD sales prevented it from imagining a legal system for online distribution. Yet it still didn’t solve the problem: The demise of Napster only inspired more illegal file-sharing companies.

Lesson: You will only answer the problems you are trying to solve.

John Grisham was rejected by a dozen publishers before getting a deal. As a startup, Cisco was rejected by 76 venture capitalists before landing money. Thomas Edison, in his words, “discovered 1,000 ways not to make a light bulb” before hitting on a design that worked.

In the late 1990s the BBC had no hit shows and was losing viewers. A new chief executive and chief financial officer introduced one small change to the broadcaster’s innovation process: They created a gambling fund to bet on risky ideas. Read on to get key tips for playing online slots for real money, you can discover the website Volpebonus lists online casinos and casino bonuses in Italy to make money. The first big winner: Ricky Gervais’ series, The Office, which had failed the normal screening process, and if you’re really into gambling, there are sites such as sbobet online where you can also get some great gambling options.

Lesson: A simple gambling fund can be one of the most effective ways to tolerate failure.

Lesson: Fire people for not failing.

General Motors was surprised when the Escalade, an SUV targeted at older, affluent males, became an icon for hip hop culture. To learn about his new customers, Cadillac’s head of external design went to a gritty corner in Detroit, waited for an Escalade to roll by, and asked the driver if he could join him.

Lesson: Customer obsession can be the fastest ways to gain perspective.

A senior leader can unintentionally squelch the creativity of a group. Instead, he or she should throw out a wild, impractical idea at the start of a brainstorming session. That will help others in the group to think more freely (and to feel free to express themselves).

Lesson: The role of a leader is not to suggest great ideas, but to create an atmosphere that fosters the ideas of others.

As Tom Peters says, “freaks are the only—only—ones who make it into the history books.”

Lesson: Nontraditional thinkers offer the maverick ideas and the personality a company needs to adapt.

Rigid, centralized structures can squelch creativity. Organizations in which employees or members share a common mission and the freedom to pursue it are better incubators of new ideas and will grow and adapt more quickly. Two examples: 3M and Alcoholics Anonymous.

Lesson: To navigate chaos, organizations require the speed and capabilities that can only exist when employees are empowered.

When Goldcorp, a small mining company, published the data for a site its geologists thought was barren, it received 110 new strategies for finding gold. The ideas came from chemists, mathematicians, military officers, and others, and the new methodologies helped the company find 8 million ounces of gold.

Lesson: The problems you are addressing have likely been tackled in parallel industries. Open the door to new methodologies.

Ask Brett Wilson, the CEO of FirstEnergy Capital, how his startup became No. 1 in the energy-trading industry, and he’ll tell you it’s because his office has no walls. He believes that formal offices and fancy chairs are a detriment to teamwork.

Lesson: Remove the walls that separate people and ideas.

18. Don’t Be Paralyzed by Change

The Benton Foundation didn’t let Microsoft digitize its Encyclopedia Britannica for fear of cannibalizing book sales, creating the opportunity for Microsoft Encarta. Years later, Microsoft was slow to move to the Web for fear of cannibalizing Encarta CD sales, which in turn created the opportunity for Wikipedia. If either the Benton Foundation or Microsoft had been willing to sacrifice the sales of their existing product in order to forge a new marketplace, they might still be the most-sourced encyclopedia today.

Lesson: Destroy value. It may seem impossible, but resistance will cause your organization to be displaced.

Whether it’s a rough foam core model of a product or a video representing a service, prototypes allow you to interact with a developing idea and uncover problems that could hinder its success.

Lesson: The act of creating a physical prototype allows you to visualize the concept and obtain useful feedback.

When Michael Eisner took over a money-losing Disney, he imposed strict project budgets, insisting that employees fit their creative ideas inside the financial box. When the opening scene of the movie Outrageous Fortune required an additional set, for instance, the writers were forced to rewrite—and came up with a cheaper and more effective opener. Eisner’s philosophy helped Disney grow from a $2 billion market cap to more than $60 billion.

Lesson: Be creative within the box.

Scanning the collapsing economy in 2009, Virgin Atlantic founder Sir Richard Branson saw opportunity: The price of planes was sure to come down, making it a good time to expand into Brazil and Russia.

In 2007 violinist Joshua Bell, who earns some $1,000 a minute when he’s on-stage at a high-end performance space such as Carnegie Hall, played Bach in the DC Metro during rush hour. Just seven people stopped to listen, and he earned $35. Bell is one of the world’s best violinists, but when he wasn’t packaged right, he didn’t sell well.

Lesson: The medium can ruin your message.

Of the 15 major airlines flying in 1982, only one is profitable today: Southwest Airlines. That success is largely attributable to its founder’s relentless focus on being “the low-fare airline.” The mantra guides every employee’s actions and decisions, helping Southwest consistently deliver on its brand promise.

From product names to brand promises, strive to be simple, direct, and “supercharged.” The “I’ve got to tell someone” factor leads things to go viral. The Las Vegas restaurant Fleur de Lys missed an opportunity when they named their super deluxe hamburger the Fleurburger. A more simple, direct, and supercharged name: The $5,000 Hamburger.

Lesson: In traditional marketing, there is an emphasis on cliché, clever wording, and invented words. Instead, adopt a message that is simple and direct.