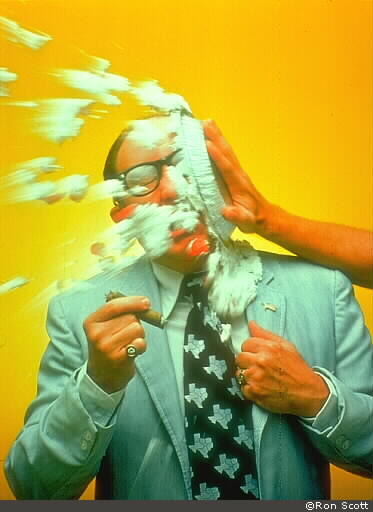 With that in mind, I proposed an idea:

What if we create a drink called Pulpo Enamorado that when delivered by the waiter, the customer gets a pie in the face?

It caught everyone by surprise. Totally unexpected. END_OF_DOCUMENT_TOKEN_TO_BE_REPLACED When we consider ‘how aha really happens‘ the traditional method we use for generating creative ideas, brainstorming, has flaws. Ask your friends, when do they have their best ideas? They will seldom answer, ‘during a brainstorming session’. Most likely it was in the shower, while driving and stuck in traffic or while daydreaming. The fact of the matter is ‘we can’t schedule creativity’ because we don’t know when that ‘aha’ will strike. Yet despite this basic human process we find that managers schedule a specific time for teams to come up with creative ideas.

This is not how creativity works in our brains. (Read page two of ‘How Aha really happens’):

“Over the past decade, neuroscientists have come a long way in figuring out how ideas form in the human mind. As it turns out, their findings contradict how most companies understand and organize innovation. But very few executives know that. They continue applying their conventional wisdom, unaware that science has overturned it.”

Another common belief is that having diverse people involved in a brainstorming session improves idea generation and selection. While this is true that doesn’t mean that the human element of ‘bias’ doesn’t exist. Group dynamics stifle innovation:

For example, in brainstorming sessions several people can quickly dominate a conversation often restricting the sharing of all potential ideas. In other cases, individuals may think less critically about a problem because they are happy to let others do the heavy lifting.  And, those people who lack confidence or internal credibility are more likely to practice self-censorship within peer groups. Finally, groups can be a breeding-ground for organizational barriers such as cultural norms and management bias that limit creativity and critical thinking.

Ok so now what?

Also in a traditional brainstorming session the group picks out the idea right there. Instead, don’t decide right away. Because if you brought an idea on any topic at all, the rest of the group might not have thought about the topic before. They’ll greet you with a blank stare in their face.

So instead of evaluating your idea the group will ask you to explain the idea as best you can, including all the elements that you combined in your head to come up with the idea. Then everyone goes off and think about individually and the discussion can continue over emails, telephone or in person. Eventually, a promising idea might emerge from the pack. At that time, it’s time for the ‘What Works Matrix‘ as an individual or group exercise.

Bottom line is creating the element of surprise at the beginning of idea generation. Because if you don’t create surprises you aren’t innovating.

Now that you know how creativity works in the brain, the point is that our brains make connections continuously without us being aware of it. And because this is a natural human process, it’s key that we take advantage of in a whole week or month and not just in a two hour session.

Now, new research suggests that this hybrid model of brainstorming is more effective than the traditional one. While the research may be new, the practice is not. Firms such as IDEO have been doing this for years. They’re well known for including people from diverse backgrounds in all their meetings, essentially preparing a cocktail mix of ingredients to generate creative ideas.

This is how creativity works in the brain.

Personally, I practice this model of brainstorming myself but have encountered problems. For example, if you’re the only one who brainstorms this way you’ll end up generating ideas that make no sense to others. They’ll think you’re nuts but at the same time they’ll give you the benefit of the doubt since you seem to have all the cool non-conventional ideas. Another problem is that people are used to brainstorming and selecting an idea right there. They don’t want to give an idea time to ‘simmer’ in their brains because of the bias for action. And also because they have more ‘important’ things to do in their routines and supposedly have no time to think. Blah!

So what to do?

Well you have to get people on board in the new way of brainstorming. My recommendation is ‘educate’ your team on how creativity works in our brains so they become aware of their own tendencies. This isn’t necessarily going to eliminate all obstacles but it’s an effective way to get people to believe, and as a plus they’ll feel smarter.

Thoughts? Do you practice a version of reverse brainstorming?