Like other people who write about, consult on , and do innovation, I get asked about books a lot. There are the basics you want to read like Innovation and Entrepreneurship by Peter Drucker, The Innovator’s Solution, Crossing the Chasm and others. I tend to want to read books that have more unconventional ideas in them, as well as some practicality.

With that said, here are a few books about innovation that I recommend you read: END_OF_DOCUMENT_TOKEN_TO_BE_REPLACED 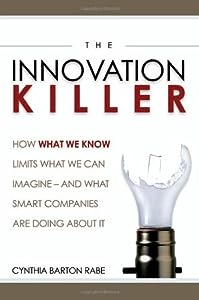 It’s been a while since I’ve posted about a book about innovation. Being that there are so many of them, and I get quite a few to read and review, there are only a handful that I would recommend. The Innovation Killer by Cynthia Barton Rabe is one of those that I recommend you read.

This is one of the best “least talked about” books about innovation out there. And, it isn’t even new. It was published in 2006, but it’s ideas will always be relevant because it focuses on how an organization can overcome human nature.

There are many companies that follow the basics that contribute to innovation: they create diverse teams, they encourage dissent and accept that mistakes will be made.

Yet, the two main killers of innovation, expert think and group think, are not kept at bay. They become blinders, and most don’t have a way to determine when this happens. END_OF_DOCUMENT_TOKEN_TO_BE_REPLACED Isn’t it exciting when something unexpected happens? Something out of the ordinary?

Of course it is.

The shock heard around the world last week was how Beyoncé released her 5th studio album on iTunes without the typical marketing blitz that accompanies such album launches. I say shock because it really was a shock. Not only that, it’s also a non-conventional type album: titled “Visual Album” because every track has a video for it.

The album has already set iTunes record with over 800,000 units sold in three days. Some have even said that this is the best album of the year, as well as the best music moment of the year. END_OF_DOCUMENT_TOKEN_TO_BE_REPLACED When I was in high school and college, I got to work both as a customer service and as technical service rep for Tracfone and Verizon. I broke a lot of rules in that time. Stupid rules like reading the script. Back then, over a decade ago, it was a common practice to read a script to the customer before digging into “the reason they are calling”. On the Tracfone account, for example, we had a specific metric we had to comply with: the dreaded “Time on Call”. END_OF_DOCUMENT_TOKEN_TO_BE_REPLACED I must say, I’m highly experimental. So when I saw the tweet below, I was a little skeptical about the content. END_OF_DOCUMENT_TOKEN_TO_BE_REPLACED

How do leaders go about creating an environment for innovation and innovative thinking?

Innovation can be taught. That is a given. But, just like everything else that matters, it takes work. END_OF_DOCUMENT_TOKEN_TO_BE_REPLACED